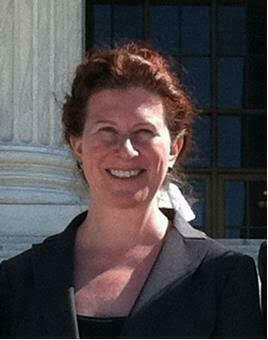 Elizabeth Hannah Rader is a graduate of Simon’s Rock College, Bryn Mawr College, and the University of Minnesota Law School. She started her legal career clerking for Circuit Judge Alvin A. Schall of the U.S. Court of Appeals for the Federal Circuit. After completing that clerkship, she clerked in the Eastern District of Virginia for Judge Leonie M. Brinkema. She went on to practice in large law firms.

While at times patent litigation kept her busy, her broader practice included copyright, trademark, and trade secret cases, as well as related litigation for technology clients. From 2002-2004, Elizabeth practiced as a residential fellow in the Center for Internet and Society at Stanford Law School. In that role, she assisted the Cyberlaw Clinic director in teaching and mentoring law students and young lawyers. She also litigated groundbreaking copyright cases involving the Constitution, fair use, and the public domain.